ISIS claimed responsibility for the murder of a new Afghan presenter and women’s rights activist in her twenties.

In a statement on its Telegram channel, the jihadist group Islamic State said Malalai Maiwand had been targeted because she was “loyal to the apostate Afghan regime”.

Malalai Maiwand, who is the second journalist killed in a month in Afghanistan, was killed along with her driver Mohammad Tahir in the eastern city of Jalalabad on their way to work, said Enekaas TV, the private television station for which she worked.

The journalist, whose militant mother was also killed by unknown gunmen five years ago, had previously spoken of the difficulties of being a female reporter under Afghanistan’s ultra-conservative patriarchal system.

Maiwand’s death comes as targeted assassinations of prominent figures become more frequent as violence escalates, despite ongoing peace talks between the government and the Taliban.

Malalai Maiwand, in her twenties, was killed along with her driver Mohammad Tahir in the eastern city of Jalalabad on their way to work, said Enekaas TV, the private television station she worked for.

Attaullah Khogyani, spokesperson for the governor of Nangarhar province, and the local hospital have both confirmed the deaths.

She added: “These guilty cowards will not be forgiven even after the peace.”

Women’s daily lives have improved since a nadir under the Taliban, but the United Nations noted that there were widespread levels of violence against women in the war-torn country.

The Afghan Journalists Safety Committee, a group that oversees the safety of journalists in the country, warned that continued violence threatened to undo years of progress.

“If the killing of journalists does not stop, Afghanistan will lose one of its greatest achievements which is freedom of the press,” the committee tweeted and called for an investigation. 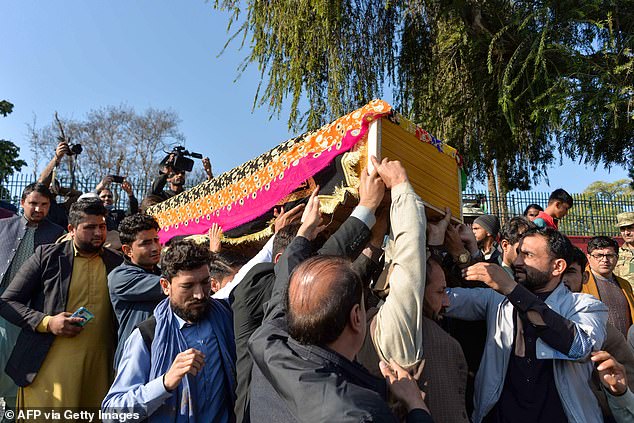 Mourners carry the coffin of news anchor Malalai Maiwand, who was shot and killed by gunmen in Jalalabad 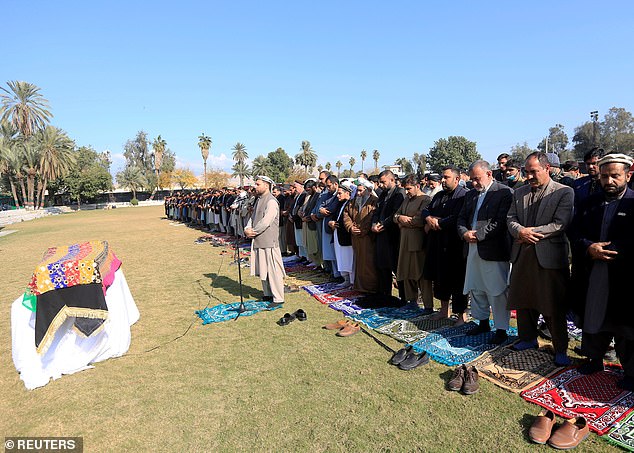 The journalist, whose militant mother was also killed by unknown gunmen five years ago, had previously spoken of the difficulties of being a female reporter under Afghanistan’s ultra-conservative patriarchal system. Men are pictured praying near his coffin today

The Afghan government, the German Embassy, ​​the European Union delegation and the British Ambassador condemned the increasing attacks on journalists and activists.

The main US envoy to Kabul, Ross Wilson, condemned the “assassination” and called for an end to the violence.

“The terrorist attack on Malalai Miwand is shocking and utterly contemptible,” Sediqqi tweeted. “The current senseless violence against our people must stop.”

Nangarhar province and its capital Jalalabad have seen regular clashes between government forces and the Taliban. The extremist group Islamic State has also claimed responsibility for several deadly attacks.

“With Malalai’s murder, the scope of work for women journalists is narrowing and journalists may not dare to continue their work as they did before,” Nai, an Afghan media advocacy group, said in a statement. communicated.

Human Rights Watch said Dayee had previously been threatened by the Taliban.

A former Kabul TV presenter Yama Siawash was killed in a similar car bomb near his home last month.

No group has so far claimed responsibility for the killings.

Afghan forces are fighting an increase in violence, triggered largely by the Taliban as they try to gain the upper hand in the peace talks in Qatar, which opened in September.